Posted on June 6, 2012 by friendsofvrindavan 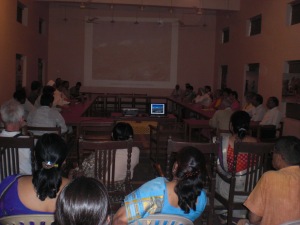 June 2nd 2012: A conference on the issues of the Yamuna Pollution was organised under the aegis of Friends of Vrindavan in the Gopal Bhatt hall at Jai Singh Ghera in Vrindavan. Serious thoughts were given by the delegates who participated in this conference. Technical measures and the public participation were discussed in this seminar.
The conference begins with power point presentation on Yamuna’s present and past, shown by FoV’s senior founding member Ms. Robyn Beeche. Giving the opening speech FoV’s Founding Trustee and Member Secretary His Holiness Acharya Shrivatsa Goswami Ji Maharaj said that the whole economy of Vraja is depended on Krishna and Yamuna. If the Yamuna is taken out from the Vraja, its culture and literature will not have any meaning. If the Acharyas from all the 5000 temples of Vraja-Vrindavan pledges to get the Yamuna clean by participating in the ‘Save Yamuna’ movement along with their devotees, the movement will become very powerful and will help eradicating the pollution from Yamuna.
Shri Jai Krishna Das, convener of the Yamuna Movement said that people from all the parts of the country is coming to join the Yamuna Movement. The parliamentarians from the different states are participating in the movement. But it is the complete apathy in part of local politicians and public representatives as they have become insensitive on Yamuna.
Prof. Vinod Tare, from IIT Kanpur, is the chairman of the Prime Minister constituted Ganga River Basin Authority, said we need to decide first what does the faith means to all of us. We need to be modern in our thought to preserve Yamuna as a resource. Taking bath in Yamuna should not only mean washing the body, but also the soul. Sanmit Ahuja, Chief Executive of the ETI Dynamics suggested the ways of purifying the sewer water. He said that peoples’ participation has important role to play in every stage when we talk about cleaning the rivers. It begins from planning to implementation.
Mr. Ahuja further added that nothing is useless. They need to be used and reused sensibly. Everything should be considered as resource. This principle has to be adopted here in India, which is key to most of the environmental challenges. In modern times environment conservation is not only the issue of India but it is a Global challenge. He said that he would make a project proposal for recycling the sewerage water for Vrindavan.
The other thinkers and delegates suggested the ways on the action plan to make the Yamuna clean. It was suggested that there has to be a concrete proposal for cleaning the Yamuna. They stressed on a big movement to bring pressure on the Government. The drains have to be permanently blocked, so that not a single drop of sewerage can go to the river. The temples of Vrindavan should be closed opposing the Yamuna Pollution. All the six tributaries of the Yamuna River should also be cleaned. It was also suggested that cleaning the Yamuna flowing in Vrindavan can be adopted as the pilot project on. It might be easy manage the sewerage in Vrindavan than other town as this town is small in size comparing to the other big cities.
The sewerage management of those towns should be studied where no river flows.
The meeting was concluded with the pledge making the Yamuna movement stronger with each passing day. The delegates included Pt. Kirtipal Sharma, Pt. Udayan Sharma, K.G. Gupta, Dr. Laxmi Gautam, Pradyumna Pratap Singh, Devendra Dixit, Prof. K.M. Agrawal, Acharya Naresh Narain, Ram Narayan Brajwasi, Girdhari Brajwasi, St. Madan Bihari Das, Bal Krishna Gautam, Madhumangal Shukla, Dr. Shyamala Mani, Ms. Benu Nath, Ms. Poulomi Dhawan and many others.
The vote of thanks was given by Jagannath Poddar on behalf of Friends of Vrindavan.

This entry was posted in Yamuna. Bookmark the permalink.